The guild structure of Prosperity follows the guidelines of a traditional Imperial court system in that leadership and responsibility is spread out over many rather than given to one individual. The King or Queen is an elected role held by the lead member of the Council, in which the entire community chose to vote for the individual that they believe would most effective allow the community to reach its goals. If the council believes that the leader is not acting with the interest of the community in mind, decisions made can be overthrown, or the title revoked.

Please Note: This system is subject to change and frequent updates

The King/Queen: Elected Representative – Acting Leader
-Overseer of general day to day government, responsible for leading the capital and surrounding settlements/cities
-Acting Council leader to the Imperial court, whose primary role is to lead the council to come to decisions on topic discussions. Advise and vote on pressing issues related to general kingdom operations, kingdom to kingdom trade agreements, War, Peace Summits, etc.

The Council: Elected Representatives – Collective Leaders
-Imperial Court in charge of the collective government, ranging from military operations to new settlement construction. Primary role is to council with the Emperor to come to a logical decision that benefits the empire as a whole.

The Faith Leader: Unique – Officer
-Imperial pope, with the Kingdom’s support, the faith based subjects are addressed by this man/woman, their responsibilities range from, construction of monasteries, to protecting the injured and giving aid to who are in need of it, They also may call on the Imperial guard and Military to support them when needed.

All Monasteries are to be considered Neutral land, No Guardsmen or Militia may interfere with any Civilian/Criminals who enters the Monasteries Grounds, as they are considered to be under the care of the Monks/Priests. The only exception to this rule is if the Monks/Priests request for help against active aggressors or other times of aid, until the request for aid has ended as dictated by the religious leaders.

The Imperial Guard: Imperial Guard, Commander – Officer
Acting permanent enforcers of Imperial order, bound by the Imperial laws set by the court, and acting law enforcement in Empire controlled lands. Primary objective is to maintain the peace while carrying out Imperial law, and when authorized, carry out punishments.

The Imperial Militia: Imperial Militia, General – Officer
Acting temporary military of theKingdom, Primary objective is to maintain and expand the strength of the Empires military strength. Defend all of the empires lands, cities and citizens, their orders come from the court and are dictated down the ranks, all members of the empire may be called to arms for a limited time during periods of war.

The Craftsman’s Guild:
Collective Support group for master and novice craftsmen, to learn their crafts and master them, their responsibilities cover all labor aspects of the community as described on the profession list, they are the economic body of the Empire who provide the armed forces with weapons and the materials for construction projects.

The Landowners:
Vassal members of the communities that have set up in the Kingdom’s Land who are given voice in matters of war and trade. Landowners carry the collective vote of their village and may present disputes before the council for deliberation.

The Civilians:
The General Populace of the Kingdom for whom the above leadership positions serve, Civilians provide the support and resources required to maintain the organizations that allow the empire to function. 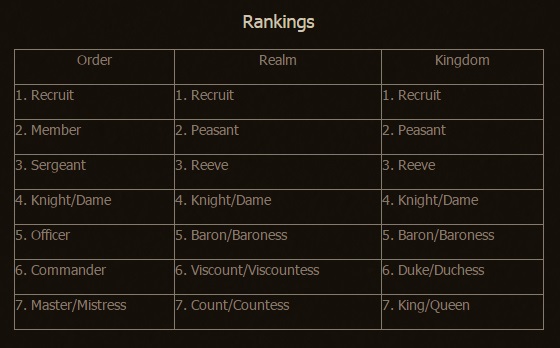